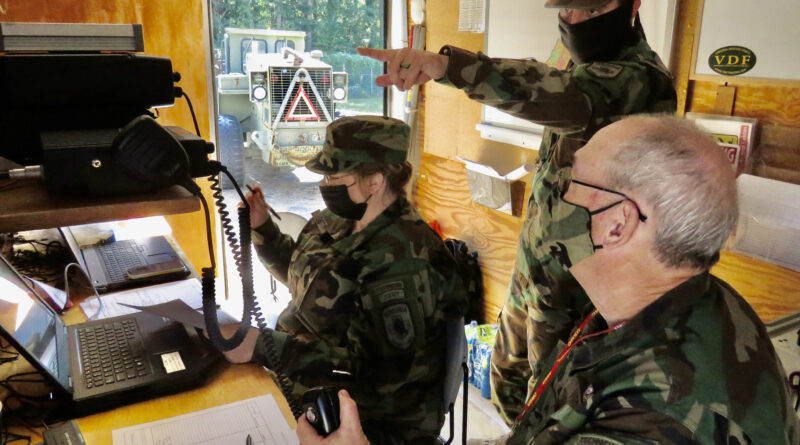 WARRENTON, Va.   –  Members of the Virginia Defense Force conducted the Highland Guardian 21 field training exercise Oct. 2, 2021, at multiple locations across Virginia to test their regional liaison, incident management assistance, access control and interoperable communications support capabilities. The exercise simulated a severe winter storm and how the VDF would support the Virginia National Guard’s role as a member of the state multi-agency response team.

“The Virginia Defense Force schedules robust and realistic training opportunities, and they keep improving their skills and experience with each exercise,” said Maj. Gen. Timothy P. Williams, the Adjutant General of Virginia. “I continue to be tremendously impressed by their volunteer spirit and willingness to give their time to assist their fellow Virginians in times of need, and we count on them to be a key part in the overall response capabilities of the Virginia National Guard.”

“Building on successes from previous exercises, VDF personnel deployed across the commonwealth and continued to demonstrate increased levels of confidence in their abilities to utilize their various systems in new ways to enable effective mission control,” he said. “The construct and execution of the scenario allowed the various command nodes to consider how they would respond in a real deployment.”

Carlitti visited training in Warrenton and said the common theme with the personnel at the location was continued improvement in all aspects of the exercise to simulate a response in support of civil authorities.

“The focus of this year’s Highland Guardian was to use the scenario events to give unit leaders at all levels the opportunity to respond to emerging events as they might occur in a widespread disaster,” said Col. (Va.) Robin Phillips, VDF operations officer. “Units at all of our armories across the commonwealth were involved in this long-distance emergency communications exercise, and I am 100 percent confident we can communicate in a real emergency, and our people know what they need to do. The Highland Guardian exercise was highly successful, and it will continue to be a highlight of our training calendar going forward.”

“This year’s exercise further demonstrated the VDF’s ability to effectively use and communicate using all of our mission-related communications assets and platforms to support a comprehensive statewide exercise,” Smith said.

All VDF communication systems were utilized including high-frequency radio voice and data and the Virginia Statewide Agencies Radio System, he said. They also operated on web-based systems like Web Emergency Operations Center and the Domestic Operations Awareness and Assessment Response Tool used by the Virginia Department of Emergency Management and the VNG to manage information during an emergency response.

The VDF regional liaison training during the exercise was greatly enhanced, Smith said. They used the WebEOC training server to send simulated requests for assistance as they would come from localities to the VDEM Regions during a response operation. The VDF regional liaisons worked the RFAs simulating the information flow between the VNG and VDEM and how they would support requests from the VDEM Regions.

Smith also said six VDF personnel acted as role players and evaluators to enhance the training value for access control teams by presenting various problems and scenarios the teams may encounter during a response scenario, then providing immediate feedback.

A total of 11 missions were worked in the WebEOC training server, six messages were sent and received via STARS, and a unique page was created in DAART for the exercise to host documents, maps, personnel reports and other resources.

In addition to monitoring their communications systems to maintain situational awareness during the exercise, VDF personnel had several other tasks including familiarization with the VNG’s National Guard Civil Support playbook and consideration of advance planning and preparations like route planning and logistical resupply in the case of an actual event.

The VDF MCP is a 7 1/2 feet by 16 feet trailer equipped with multiple radio systems for voice and data communications. Using an MCP, members of the VDF are able to communicate across a variety of radio spectrums with emergency response and public safety organizations as well as amateur radio operators. In the event of severe weather like hurricanes or heavy snow where traditional communication systems could become disrupted, the VDF MCPs would provide a vital communications capability for the VNG as it conducts operations to assist with keeping citizens of the commonwealth safe.