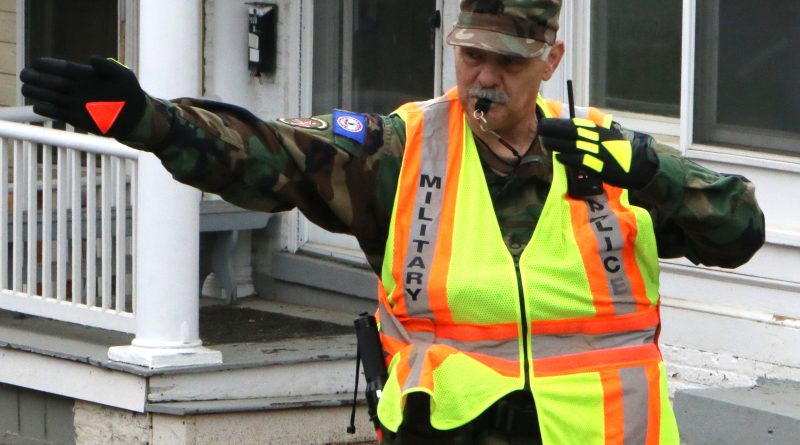 “I want to personally thank you for volunteering,” said the Honorable Terry H. Whittle, clerk of the Winchester Circuit Court, before he swore in the group of the Virginia Defense Force troops as special deputies April 28. “This is a big event for the city, and without your participation and willingness to serve this festival doesn’t go on. Part of the reason of its success is because of the work that you do, and we appreciate that and thank you for your service.”

The Shenandoah Apple Blossom Festival is a series of more than thirty events held in Winchester and Frederick County including band competitions, dances, parades and a 10K Race. Crowds in excess of 250,000 attend the festival each year.

“The outstanding success of Task Force Shenandoah and all that participated in the operational Apple Blossom Festival mission demonstrates the training and ability of the VDF,” said Lt. Col. (Va.) Bill Robbins, commander of Task Force Shenandoah. “ABF 2016 was a demonstration of the dedication and professionalism of all participants and is a product of the “can do” spirit, a sense of camaraderie and cooperative spirit.”

In addition to providing a valuable service to their community, the ABF mission also provides the VDF with an opportunity to train on multiple communication systems and rehearse procedures they would use if they were called to state active duty to augment the Virginia National Guard.

“Traffic control is one of the tougher jobs that we handle on a regular basis,” said Capt. Doug Watson, patrol operations commander for the Winchester Police Department. “We don’t know what we would do if we didn’t have the support of the Virginia Defense Force.”

In addition to the traffic control assistance, Watson said VDF leaders have also helped with contingency planning for this year’s festival and plan to continue to develop those plans in the future.

“I am really proud of the great work of the Virginia Defense Force,” said Maj. Gen. Timothy P. Williams, the Adjutant General of Virginia. “It is clear that men and women of the VDF love being out here, and the like having the opportunity to be of service for something bigger than themselves.”

In addition to providing service to the community, VDF service helps troops build skills they can take back to their civilian jobs.

“This is fantastic, and I really love coming out here every year,” said Sgt. (Va.) Michael Felton, serving at the festival for the eighth year. “The public seems to enjoy having us out here, and we enjoy working with them. Being out here also makes my critical thinking skills sharper, able to observe the environment better and use those skills elsewhere.”

Felton credited the classroom training he has received as well as the camaraderie with his fellow VDF troops and leadership skills from his superiors for improving his management skills in his civilian job.

Members of the VDF perform a similar function for the Virginia War Memorial in Richmond when they volunteer their time to assist with traffic control during Memorial Day and Veterans Day events, and they will provide similar support at the Lynchburg Air Show in May.