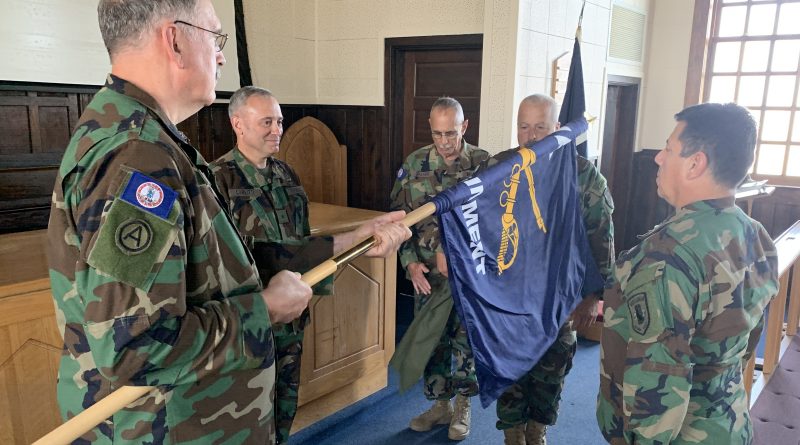 FORT PICKETT, Va. — The Virginia Defense Force stood down its three existing regiments and stood up a single regiment during a ceremony held Sept. 29, 2019, at Fort Pickett, Virginia. The regimental will oversee six companies stationed across the state focused on providing civil support security and communications capabilities to the Virginia National Guard.

“Consolidating in one regiment gives us an organizational construct that reflects our manning and is supported with the necessary leadership to ensure mission readiness and success of our line companies,” explained Brig. Gen. (Va.) Justin P. Carlitti, commander of the VDF. “This line units are our center of gravity, and the simplified structure will help us meet the goals of ensuring they are well staffed, trained and equipped for the missions to support the Virginia National Guard.”

Carlitti said he believes the consolidation with make the VDF more tactically agile, improve morale, spread workload and position the organization for growth in mission and eventually in size. The current VDF strength is approximately 250 personnel.

The ceremony stood down the VDF’s 2nd Regiment in Manassas and 4th Regiment in Lynchburg, as well as the 3rd Regiment (Reserve) in Richmond.

The line companies of the 1st Regiment are located in Fairfax, Warrenton, Winchester, Virginia Beach, Lynchburg and Cedar Bluff.

As part of the reorganization, the VDF is also looking to establish a cyber operations detachment to augment existing VNG capabilities and provide an avenue for citizens with skills an expertise in the cyber domain to serve the commonwealth.

The VDF’s Communication Battalion will continue to be based in Lynchburg and has the responsibility of maintaining the four mobile communication platform. The VDF MCP is a 7 1/2 feet by 16 feet trailer equipped with multiple radio systems for voice and data communications, and it also features a map board and work space so it can function as a mobile command post.

Using an MCP, members of the VDF are able to communicate across a variety of radio spectrums with emergency response and public safety organizations as well as amateur radio operators. In the event of severe weather like hurricanes or heavy snow where traditional communication systems could become disrupted, the VDF MCPs would provide a vital communications capability for the Virginia National Guard as it conducts operations to assist with keeping citizens of the commonwealth safe.

The VDF’s Headquarters provides mission command for all the organization’s line units as well as providing additional augmentation capabilities to the VNG.

The VDF also staffs a regional liaison resource to support VDEM’s seven regions of the state and help maintain effective information flow between the regions, the state and VNG forces positioned to provide support where there are needed.