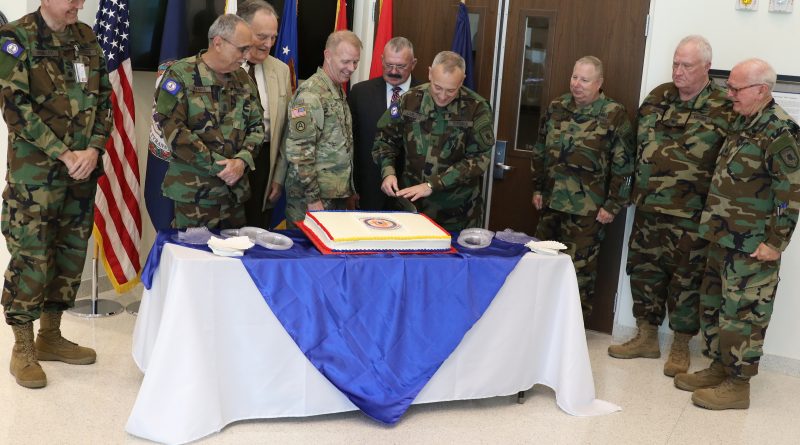 The VDF kicked off 2019 with personnel taking part in the “Perfect Storm” statewide amateur radio emergency communications exercise Jan. 19, 2019, in Richmond and Lynchburg, Virginia. The VDF was among the nearly 80 amateur operators and agencies registered for this annual event. In Richmond, VDF personnel trained on amateur radio systems and built partnerships with amateur radio operators who support the Virginia Department of Emergency Management at the Virginia Emergency Operations Center. In Lynchburg, VDF members used the equipment in their mobile communications platform trailer to make contact the operators across the state.

Members of the VDF operated traffic control points and provided mission command support May 3-5, 2019, at the 92nd Shenandoah Apple Blossom Festival in Winchester, Virginia. VDF personnel from units across the state assisted local law enforcement in keeping traffic moving and operated TCPs during a variety of events. The VDF also took advantage of the mission to train on multiple communication systems and rehearse administrative, mission command and logistics procedures they would use if they were called to state active duty to augment the VNG. The Shenandoah Apple Blossom Festival is a series of more than 30 events held in Winchester and Frederick County including band competitions, dances, parades and a 10K Race. Crowds in excess of 250,000 attend the festival each year.

VDF chaplains volunteered their time to conduct Sunday services at the Fort Pickett Bulla Chapel through the summer to provide religious support to soldiers conducting training on the installation. The partnership between the Virginia National Guard Chaplain Corps and the VDF Chaplain Corps kept the chapel open every Sunday for the conduct of services from June 2 through Aug. 25, 2019. Coordination for the support involved senior chaplains at the Joint Force Headquarters – Virignia, Virginia Army National Guard and 116th Infantry Brigade Combat Team and the Virginia Defense Force. The experience for the VDF chaplains has been very positive. In several situations, National Guard chaplains for units outside of Virginia either asked the VDF chaplains to conduct the Sunday service or they conducted the service together.

Members of the VDF took part in the United Resolve multi-state, multi-agency communications exercise at locations across the state June 1, 2019, and they assisted local law enforcement at the commemoration of the 75th anniversary of D-Day June 6 at the National D-Day Memorial in Bedford, Virginia. More than 50 VDF volunteered their time to assist local law enforcement with traffic flow, parking and pre-security checks for the D-Day 75 ceremony in Bedford. They established a command post at the local VNG readiness center and stationed personnel at 15 parking locations where attendees gathered to board buses for the event, and the D-Day Memorial staff estimated a crowd of more than 10,000 attended. VDF personnel helped keep traffic moving in the parking lots, answered general questions and help explain the items allowed at the ceremony and the general screening procedures. They also had a chance to meet World War II veterans attending the event. During United Resolve, VDF personnel used equipment in the their Mobile Communication Platforms to establish high frequency radio communications at units in Richmond, Cedar Bluff, Winchester and Lynchburg as well as with state guard organizations in New York, California, Washington and Indiana, elements of the Virginia Civil Air Patrol and the Healthcare Emergency Amateur Radio Team in Newport News. In addition to voice communications, the exercise tested data transmission capabilities for text email messages and transferring digital photos.

The VDF stood down its three existing regiments and stood up a single regiment during a ceremony held Sept. 29, 2019, at Fort Pickett, Virginia. The regimental will oversee six companies stationed across the state focused on providing civil support security and communications capabilities to the Virginia National Guard. The mission of the VDF’s 1st Regiment is to provided trained and ready civil support security and interoperable communications capabilities to support the Virginia National Guard during emergency support operations.  The ceremony stood down the VDF’s 2nd Regiment in Manassas and 4th Regiment in Lynchburg, as well as the 3rd Regiment (Reserve) in Richmond. VDF line companies are made of platoons focused on civil support security and communications. The civil support security platoons provide capabilities such as traffic management, access control, gate sentry and vehicle searches, and the communication platoons utilize HF, VHF and UHF radios and tactical communication packages for data and voice messaging as well as incident management. The line companies of the 1st Regiment are located in Fairfax, Warrenton, Winchester, Virginia Beach, Lynchburg and Cedar Bluff. In early November, members of the 1st Regiment conducted a multi-day exercise at Fort Pickett with a scenario that focused training on area search, access control, road blocks and other security tasks, while communications personnel conducted training in Lynchburg and Richmond.

As part of the reorganization, the VDF also established a cyber operations detachment to augment existing VNG capabilities and provide an avenue for citizens with skills and expertise in the cyber domain to serve the Commonwealth.

The VDF’s Communication Battalion, headquartered in Lynchburg, with detachments in Richmond, Warrenton and Lynchburg, operates and maintains four mobile communication platforms. A VDF MCP is a 7 1/2 feet by 16 feet trailer equipped with multiple HF, VHF and UHF radio systems for voice and data communications, to include an air-to-ground communications capability. It also features a work space so it can function as a mobile command post. Using an MCP, members of the VDF are able to communicate across a variety of radio spectrums with emergency response and public safety organizations as well as amateur radio operators. In the event of severe weather, like hurricanes or heavy snow where traditional communication systems could become disrupted, the VDF MCPs would provide a vital communications capability for the VNG as it conducts operations to assist with keeping citizens of the commonwealth safe.

VDF personnel continue to volunteer their time to assist with traffic control at the Virginia War Memorial at the Commonwealth Veterans Day and Memorial Day Ceremonies.

VDF personnel assigned to ESF 16 supported the VNG Joint Staff hurricane response exercise for a week in May. In September, the ESF 16 personnel also were on duty when the VNG staged approximately Soldiers and vehicles for state emergency support duty in the Eastern Shore and Hampton Roads areas to be ready to assist local and state emergency agencies respond to potential impacts from Hurricane Dorian.

The VDF also staffs a regional liaison resource to support VDEM’s seven regions of the state and help maintain effective information flow between the regions, the state and VNG forces positioned to provide support where there are needed.

After two years of planning and coordination, the first-ever VDF Cadet Program kicked off in Westmoreland County at Washington and Lee High School in September 2019. The program seeks to teach new skills, promote leadership, foster appreciation for military service and have fun, all while engaged in a military structure. The cadets will drill one Saturday each month with a cadre of VDF personnel with the full support of the county school board and school superintendent and in direct coordination with the high school principal.

The Virginia National Guard and Virginia Defense Force trace the heritage and traditions of citizen service to the founding of Jamestown when Capt. John Smith organized the colonists for defense. Since the colony’s founding on May 14, 1607, there has not been a day since without a military presence in Virginia to protect citizens at home and defend freedom overseas.