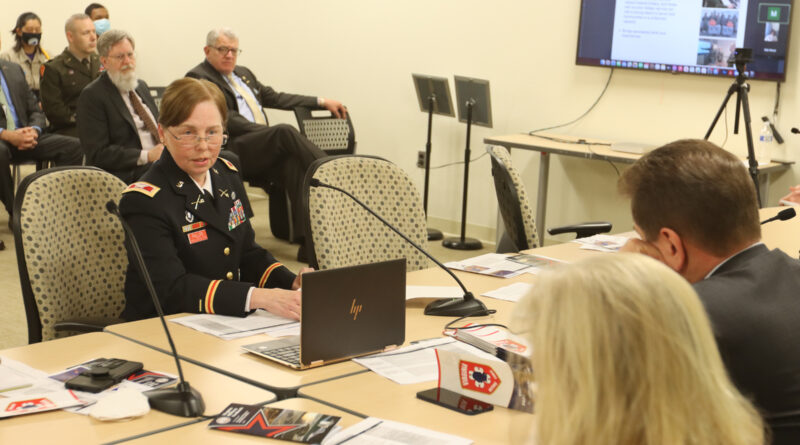 Phillips is the commander of the Virginia Defense Force’s 1st Regiment, and she is the first female to be promoted to colonel in the VDF as well as to command at the brigade or regimental level.

She has served in the VDF for nearly two and half years, and she joined after making a connection at a Toastmasters club meeting which prompted her to come out look at the training taking place at Fort Pickett.

“I was pretty impressed with the training that I saw at Fort Pickett,” Phillips said, and she added that after talking with currently serving personnel it was clear that they were very capable and serious about their work.

“At that point, I had been retired and settled for several years and while I wasn’t looking for a full time job, I was itching to get involved in something fulfilling and meaningful,” she said. “Joining the VDF was a great way to put my military experience to use.”

Phillips served on active duty as a Signal Corps officer with assignments in Panama, Arizona and Germany, then as a Foreign Area Officer with experience in Eurasia and the Asia-Pacific region. She retired as a lieutenant colonel.

She initially joined to serve as the G6 communication officer, then became the G3 operations officer and then was promoted to colonel and took command of 1st Regiment.

“I enjoy working with the Virginia National Guard on staff initiatives, planning and real missions,” she said. “I enjoy learning new skills and systems related to domestic operations and emergency preparedness, things that were not part of my experience in the active Army.”

She said she also enjoys working with her VDF colleagues to develop, improve and advance the organization.

“I think we have come a long way even in the short time I have been a member,” she said.

In addition to her service in the VDF, Phillips serves on the Williamsburg Area Arts Commission and also works with a couple of nonprofits, mainly as a grant writer and in support of fundraising events. She said her experience on the Arts Commission gave her some insight on what grant-making organizations are looking for, which has helped make her fairly successful in her grant writing efforts.

“It has been very gratifying to help these organizations survive, especially during the pandemic when needs were greater, and funding got pretty thin,” she said.

Phillips acknowledged that while juggling VDF duties with other obligations can sometimes be a challenge, serving in the organization has been “a fantastic learning experience and I have thoroughly enjoyed it.”

As she reflected on March being Women’s History Month, Phillips said although she served in the early years of women’s integration into the Regular Army, she was never the first female in any of her assignments.

“I was one of only about 600 women in the Panama invasion, and then one of about 40,000 women in the first Gulf War, but never a first until serving with the VDF,” she said.

Phillips joined the VDF as a lieutenant colonel, then was promoted to colonel based on her duty performance and potential for increased responsibility in the organization.

“Although my initial rank of lieutenant colonel was recognized by virtue of having earned it in the active Army, other women have been steadily making progress into the higher leadership positions in recent years,” she said. “I am grateful to have had these opportunities, and I hope that this shows others that these opportunities are open to everyone.”