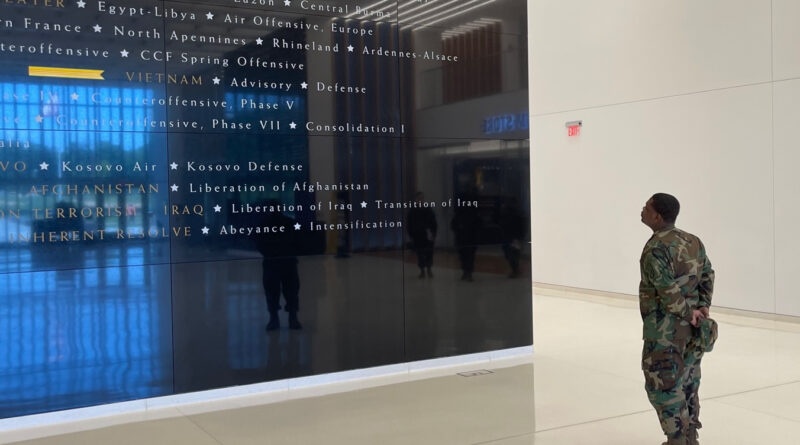 FORT BELVOIR, Va. – Members of the Virginia Defense Force’s Bravo Company, 11th Signal Battalion, 1st Regiment, visited the National Museum of the United States Army at Fort Belvoir on June 4, 2022, as part of the Fairfax-based unit’s regular weekend training. The purpose was to increase their overall understanding of Army history as well as their own role as part of the nation’s “organized militia.”

The Museum is managed by the nonprofit Army Historical Foundation.

First Lt. (Va.) Mark Royce, Bravo Company commander and a political science professor at Northern Virginia Community College, said the visit gave VDF personnel a unique opportunity to learn more about the Army’s decisive role in U.S. history and the significance of both the active and reserve forces in maintaining readiness.

“Getting to see history, and how the military, uniforms, equipment, supplies, and other ways of living have changed over the years, gives an interesting and better understanding of the Army and VDF history,” she said.

Baldon, a former U.S. Army Reserve drill instructor who joined the VDF in 2008, recently concluded her tour with Bravo Company and now serves as command sergeant major of the 11th Signal Battalion.

The VDF personnel started by watching Of Noble Deeds, a short film that portrays Army history through the framework of the seven core values. The title comes from a speech given after the Civil War by Joshua Chamberlain, a Medal of Honor recipient for his actions at Gettysburg.

With these words in mind, Bravo Company members then explored the exhibits.

Sgt. (Va.) Fei Guan said the colonial warfare exhibit, “Founding the Nation,” was the most touching because of units’ small size and limited equipment compared to the U.S. Army today. Despite these limitations, he said, the organized militia has played an “indispensable role” in American history.

Cpl. (Va.) Peter Emcheff added that the exhibit holds “a very strong and direct tie to the history of the VDF,” as the Continental Army was founded partly with colonial militia, including Virginia troops.

What impressed Spc. (Va.) Nicholas Dwuma were displays showing the numbers of Americans who have served in the Army over the years. He noted that more than 11 million served during World War II alone.

Spc. (Va.) Teresa Malone appreciated the technology displays, which showed how the capabilities of an Army signals unit have changed over the years, from World War I aircraft radios to modern software-based communications systems.

For Pfc. (Va.) Darryl Potter, the “Founding the Nation” exhibit provided a basis for understanding how America’s Army has transformed the world over the centuries. The “Changing World” exhibit, focusing on the post-Cold War era, shows that today’s Soldiers are fighting for the same values as their Revolutionary War counterparts. “They’re still fighting for what we’re trying to become. One nation.”