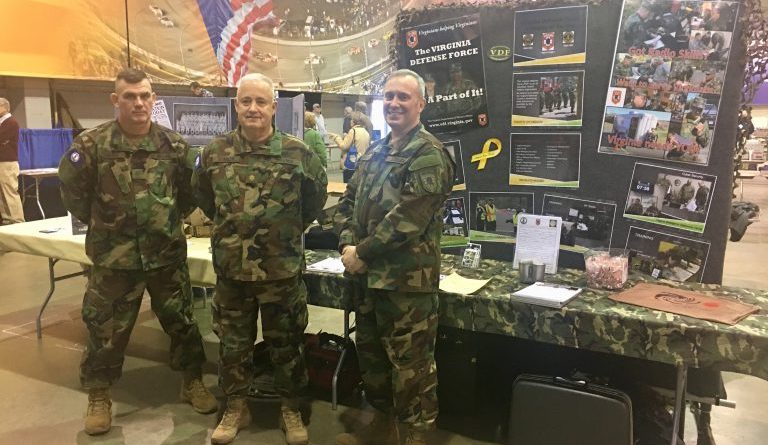 RICHMOND, Va. — The Virginia Defense Force kicked off a new recruiting push with a display at the Frostfest amateur radio show and convention Feb. 3, 2018, in Richmond, Virginia. The all-volunteer reserve of the Virginia National Guard is looking to grow from its current strength of approximately 300 personnel to its full authorized strength of 750.

“Based on the incidents of severe weather that impacted multiple locations across our nation in 2017, the Adjutant General of Virginia tasked the VDF to grow in order to better support the Virginia National Guard’s mission of assisting emergency response organizations to protect citizens of the commonwealth in times of need,” explained Brig. Gen. (Va.) Justin Carlitti, commander of the VDF.

Not only was the convention a great place to look for potential new members, it also provided an opportunity to network with key organizations in the amateur radio community, Carlitti said. He walked away from the convention with a list of contacts interested in conducting training exercises.

Most recently, members of the VDF were part of the Virginia National Guard’s support to the inauguration of Virginia’s 73rd Governor and provided communications support and assisted with marshalling all the march elements for the parade.

In reviewing the overall success of the VNG’s support mission, Maj. Gen. Timothy P. Williams, the Adjutant General of Virginia, said he was pleased with the role of the VDF. “We had great support from our Virginia Defense Force volunteers who kept the entire parade formation moving, and they continue to prove why they are such a valuable resource and vital part of the Virginia National Guard team in all of our domestic operations,” he said.

While some VDF members are retired military or first responders, many are younger people who looking to gain leadership experience and new skills.

“The main requirements for joining the VDF are a willingness to serve and an ability to respond when called to duty,” Carlitti said. “Regardless of your experience level or background, if you have a desire to serve your community and can volunteer a few hours of your time each month, then there is a place for you in our organization.”

Membership in the VDF is open to U.S citizens and legal residents with or without prior military service, ages 16 to 65. Members must have a valid social security number and no felony convictions.

The display at the convention showcased some of the organization’s history.