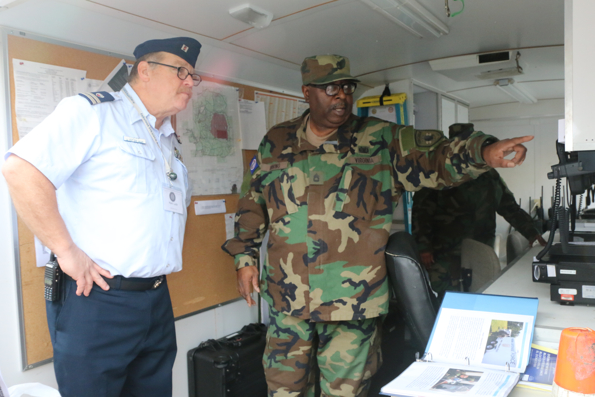 “VDF Commanding General Brig. Gen. (Va.) Justin Carlitti’s goal is to reach out to other emergency services organizations across the commonwealth, and the U.S. Coast Guard Auxiliary is one of the most visible agencies and is very interested in our communications interoperability,” explained Lt. Col. (Va.) Nicholas Christoff, the VDF’s operations officer. “It was a brilliant move to combine a MCP display with informational VDF recruiting and capabilities briefings to Auxiliary and active U.S. Coast Guard leadership. This reinforced the strong relationships between our two agencies.”

“They were impressed with what they saw, especially the high caliber of our personnel and what capabilities the VDF deploys to an emergency event,” Christoff said. “We now have their full approval to plan and execute upcoming joint VDF/Coast Guard Auxiliary training exercises.”

According to their official web site, the Coast Guard Auxiliary was established by Congress in 1939 with the mission to promote and improve recreational boating safety, provide trained crews and facilities to augment the Coast Guard and enhance safety and security of our ports, waterways and coastal regions and to support Coast Guard operational, administrative and logistical requirements.

Most recently, members of the VDF were part of the Virginia National Guard’s support to the inauguration of Virginia’s 73rd Governor in January 2018 and provided communications support and assisted with marshalling all the march elements for the parade.