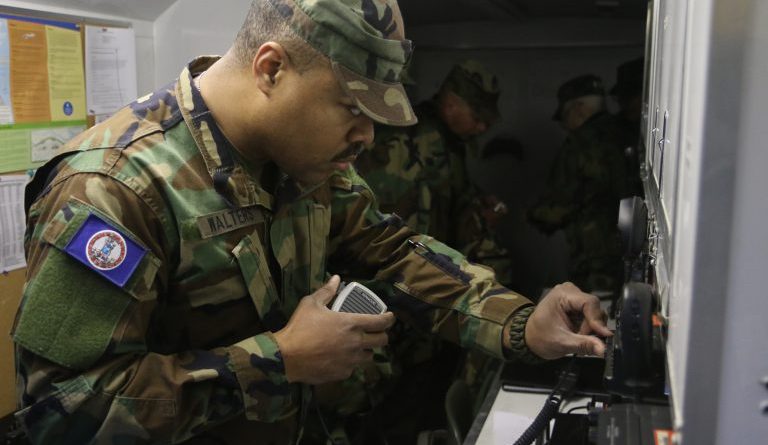 “This weekend was an opportunity to sharpen existing skills or to learn new ones with a focus on hands-training and individual proficiency,” explained Brig. Gen. (Va.) Just Carlitti, commander of the VDF. “I was really happy to see the effort everyone put into the training, and this will be put to use in the future with our plans for evaluations and exercises.”

Cpl. (Va.) Regina Harris, a Farmville resident who works for the Virginia Department of Corrections, was one of the VDF members training on the mobile communication platform. She has served in the VDF for more than three years, and the MCP was a new training opportunity for her. She explained that one of the things she liked most about serving in the VDF is the opportunity to learn new skills.

“I love it,” Harris said. “I learn something new all the time. I am learning so much about communications and how we integrate with other organizations.”

Harris said she joined the VDF because she was looking for an opportunity to belong to an organization that helped people. She was familiar with the military because her father and daughter both served in the U.S. Army, and after learning about the VDF, she felt it was an organization she wanted to be a part of and to help other people.

“I stay because I enjoy it,” Harris said. “I want to help. I want to be there if someone needs us. I love being part of a team, and everyone is very supportive.”

Sgt. (Va.) Kasui Young, a Newport News resident who works with security forces at Fort Belvoir, was one of the instructors for the incident management assistance class.He has served in the VDF for more than eight years and focused his course on hands-on learning to make it more interesting.

“I wanted to make the class fun to get everyone engaged and involved so the enjoyed the training,” he said. “I also used realistic scenarios with some additional stress so they can see how important it is to adapt, overcome and accomplish the mission.”

Much like Harris, Young joined the VDF because he wanted to help people and stays because of the sense of teamwork and camaraderie.

“I love it, and nothing is going to stop me from serving,” Young said. “I would tell anyone interested in the VDF that is an awesome unit to be a part of. I wouldn’t miss it for anything in the world, and I like doing something that is for the greater good of the commonwealth.”

Pfc. (Va.) Mikayla Morgan was one of Young’s students, and while she has only been in the VDF for barely two months, she said it has been a positive experience. A native of Allegheny County and senior at Radford University, she plans to pursue a masters degree at Clemson and work with veterans experiencing PTSD. She learned more about the VDF from Dr. Jim Newman, one of her professors who is a major in the VDF.

“It has been a good learning experience, and I really like it,” Morgan said. “The people are what I like the most.”

Morgan said that she was motivated to join the VDF after seeing all the hurricanes that hit different parts of the country in 2017. She explained that she wanted to be “on the front lines at home” to lend a helping hand to those in need.

“I wanted to be in the community to help, so the VDF was exactly what I was looking for,” she said. “It allows me to serve, but also give me the freedom to go to school.”

Morgan was made a team leader during the training, and she explained that she learned a lot from the opportunity.

“This is a way for young people to get leadership experience and advance skills in a setting where everyone wants to lift you up,” she said.