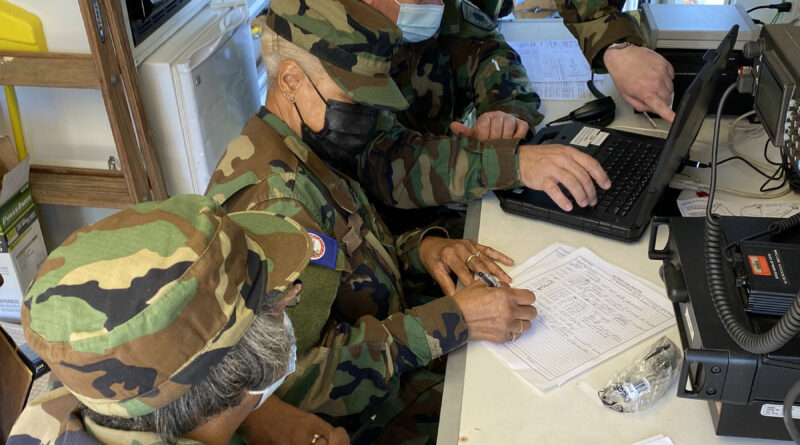 “After visiting VDF training in Lynchburg and seeing first hand what they can do and how well they do it, I am more confident than ever we can count on them to be there when we need them,” said Maj. Gen. Timothy P. Williams, the Adjutant General of Virginia. “The VDF continues to be a vital part of the Virginia National Guard team and provide us with important additional capabilities, and I am so impressed by the hard work of the dedicated volunteers who so willingly give their time, energy and abilities to be able to assist their fellow Virginians.”

“I am extremely happy with the how well our personnel performed during the Highland Guardian exercise,” said Brig. Gen. (Va.) Justin P. Carlitti, Sr., commander of the VDF. “I have been with the VDF for eleven years, and we have now reached a level of proficiency we have not seen in the organization since I joined. We showed our system works, our people trained, and we are building on these successes. This is where we should be, and I am very proud of the organization.”

Carlitti said he was also impressed with VDF junior leaders demonstrating initiative during challenging situations and taking charge to move things forward. He also acknowledged the exercise sufficiently stressed both personnel and the systems they used, very much simulating real-world situations and the different paths to be followed to find solutions.

The exercise also integrated VDF personnel who will operate as liaison officers in Virginia Department of Emergency Management regional response centers to facilitate communication between localities and the Virginia National Guard.

VDF leaders captured a number of key lessons learned in their after action review.

While integrating the amateur radio organizations was an important step in continuing to understand their capabilities and building partnerships, leaders acknowledged it is important for all stations operating on the radio network to use common terminology and work to improve message brevity.

Most equipment and web-based systems were fully functional during the exercise, and this was due to the amount of time spent each month testing and training to make sure they are ready to go when needed. Systems that did not work well were identified for corrective action to get them operational.

During the after action review, Carlitti shared his ongoing conversations with multiple amateur radio organizations who expressed their desire to continue training with the VDF, and additional exercises are being planned for 2021.

The VDF MCP is a 7 1/2 feet by 16 feet trailer equipped with multiple radio systems for voice and data communications, and it also features a map board and work space so it can function as a mobile command post. Using an MCP, members of the VDF are able to communicate across a variety of radio spectrums with emergency response and public safety organizations as well as amateur radio operators. In the event of severe weather like hurricanes or heavy snow where traditional communication systems could become disrupted, the VDF MCPs would provide a vital communications capability for the VNG as it conducts operations to assist with keeping citizens of the commonwealth safe.