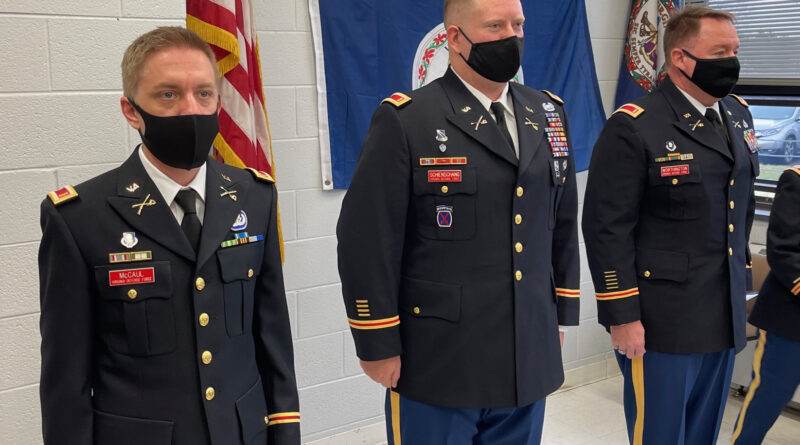 Lt. Col. (Va.) Michael Cunningham, commandant of OCS, opened the ceremony by praising the candidates for dedication to service and commitment to excellence.

“I salute each of you in taking on this new challenge,” Cunningham said.

Cunningham noted that he himself was a product of OCS in the U.S. Army and was honored to lead the VDF’s program.

In concluding remarks, Col. (Va.) Nicholas Christoff, VDF chief of staff, emphasized the importance of OCS as a way to develop officers who have first-hand experience of enlisted life. He added that this year’s class “is one of the best OCS classes in terms of candidates, family support and family turnout.”

Col. (Va.) Robin Phillips, commander of the 1st Regiment, led the candidates in their commissioning oaths. She also presented a challenge coin and her own original “butter bar” second lieutenant rank pin to  Worthington, the class honor graduate.

Phillips, who formerly served as head of VDF operations and training, reminded the new officers that “your promotions are not rewards given for excellent performance. They are given in expectation of the great things you’ll do in the future.”

McCaul entered the VDF without prior service but comes from a family with a strong military tradition. Both grandfathers served in World War II, one in the Army and one in the Navy. His stepfather served in the Navy during Vietnam, and his uncle, who pinned on McCaul’s new rank, is a retired Army lieutenant colonel and West Point graduate.

“The call to serve came late for me and coincided with the birth of my daughter,” McCaul said. With his wife’s encouragement, he contacted recruiters from several branches but learned he was over enlistment age. However, “the recruiters understood my desire to serve and encouraged me to look for alternate opportunities. That is when I discovered the Virginia Defense Force.”

After researching the VDF, he reached out to a recruiter who invited him to a monthly drill. “I enlisted that very first drill weekend and have never regretted the decision.”

In five and a half years with the VDF, McCaul has had many opportunities to serve the Commonwealth of Virginia and the nation. “I have been deployed for two hurricanes. I was assigned to the US Capitol Insurrection Response. Additionally, I served on two-months-long rotations for the state’s COVID-19 response. This responsibility has been meaningful to me and to my family.” He thanked his family, especially his wife, Brianna, for making his service possible.

Schienschang joined the VDF in 2020 after retiring as a staff sergeant in the U.S. Army. He enlisted in the Army in 2005 after graduating from high school in Orange, Virginia, and retired in 2014 due to combat injuries.

He served in Iraq’s “Triangle of Death” region from August 2006 to November 2007 as a grenadier and dismounted scout in the 10th Mountain Division. During this deployment, the division’s commander personally recognized Schienschang for actions in combat including a close ambush.

Upon reenlisting, Schienschang trained to become a military police officer. His first MP assignment was at the Combined Arms Center at Fort Leavenworth, Kansas, where he served in various roles, including as a member of a special reaction team and noncommissioned officer in charge of the arms room.

In 2011, he deployed to Kuwait with the 1st Cavalry Division as part of Operation Spartan Shield.

After retirement, Schienschang said, he expected that he would never have another chance to wear a uniform. “Upon running into a VDF member and finding out a bit more, however, I was excited to learn there was a way I would still be able to serve my community and return to the military.”

He joined the VDF in 2020 and was assigned to the Communications Battalion, where he has been serving as NCO in charge of the 1st Detachment. In early 2021, he was selected to attend OCS.

“In the two years I have been in the VDF,” Schienschang said, “I have been consistently impressed with the quality of its personnel; they’re dedicated to the mission, technically proficient, and are here because they want to be. While the VDF is certainly a different organization than the regular Army, I’m proud of my fellow VDF members and all they do for the commonwealth; I consider it an honor and a privilege to help lead them.”

Worthington retired from the U.S. Navy in 2014 as a chief petty officer after 24 years on active duty as a special boat operator in the Naval Special Warfare Community.

“At the time, I felt that I had more to offer,” he said, “but as a single father with three daughters, I decided the time had come to close a chapter on my life. Four years later, I came across a post containing information on Facebook about the Virginia Defense Force.”

Worthington did some research on the VDF and contacted the recruiter. “I visited E Company in Fairfax during a drill, and found something that I had been seeking to find in other social groups and organizations. Immediately I gained a focus on getting back in shape and enlisting. Although it’s certainly not the same as active duty, I could see that the VDF would fit into my life and give me that sense of family that all veterans seek when returning to civilian life.”

View more photos on the VDF Facebook page at https://ngpa.us/17794.