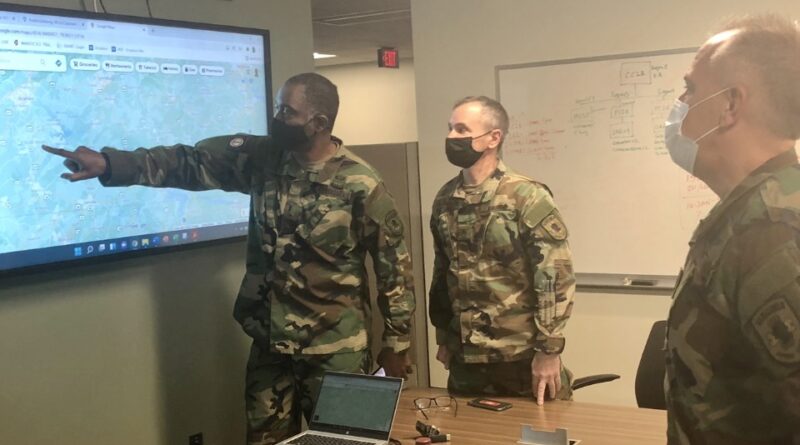 RICHMOND, Va. — The Virginia Defense Force fielded new logistics support capabilities during Virginia National Guard winter storm response operations in January 2022, helping make sure VNG units would have all the equipment needed to be successful in their assigned missions.

“These items are centrally stored to ensure accountability and maintenance, then distributed to Virginia Army National Guard or Virginia Air National Guard units across the commonwealth,” Rohler said.

Rohler said Ganues provided the coordination efforts needed to ensure the distribution teams were prepared to respond when needed. Two teams consisting of two personnel and one vehicle each executed distribution missions to Troutville and Rocky Mount as well as Culpeper and Fredericksburg prior to onset of the winter storm, and they safely travelled nearly 1,200 miles.

“The VDF distribution assets allowed the VaARNG units to focus on mission preparation with on hand equipment,” Rohler said. “With the assistance of the VDF, all needed equipment was on location with the units prior to the onset of the storm.”

When another round of winter weather hit Jan. 20, two more VDF distribution teams were called to duty and safely travelled nearly 300 miles delivering supplies and equipment.

“Great credit goes to Chief Ganues who managed the VDF effort in support of the J4 Joint Logistics Directorate, and credit also goes to our team members who are among the very best of the VDF,” said Col. (Va.) Nicholas Christoff, the VDF chief of staff. He said it was an example of how the VDF strives to be a ready, resilient and responsive force.

“The Virginia National Guard Joint Logistics Team plans to increase the use of the VDF in the future,” Rohler said. “The VDF plays a vital role in the VNG’s domestic response mission, and their responsiveness, dedication to the commonwealth and skills enhanced our operations. We look forward to continuing to operationalize their skills.”