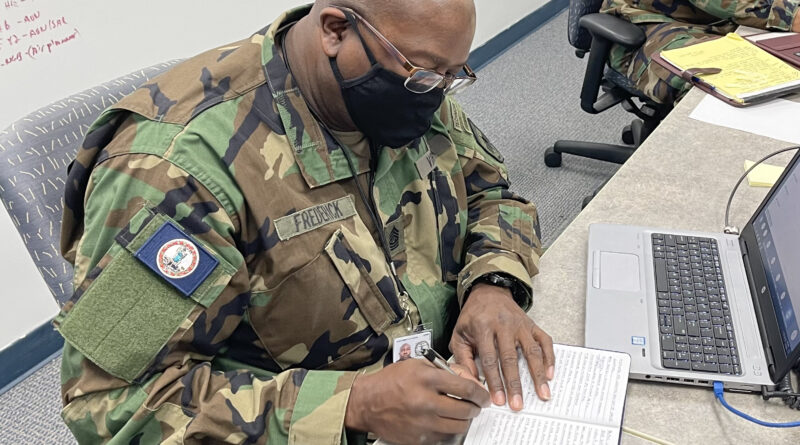 Frederick recently assumed the duties as the Virginia Defense Force Command Sergeant Major, and he said it is an honor to be the first Black VDF CSM. He learned about the VDF after visiting the Virginia National Guard armory in Manassas looking for more information about joining the Virginia National Guard.“I really enjoyed the esprit de corp while serving in the U.S. Army and the U.S. Army Reserve, and I wanted to continue to serve the Commonwealth of Virginia in some capacity with the military,” Frederick said. “Serving in the VDF has given me the opportunity to utilize my background in emergency management and law enforcement to assist the officials and citizens in the commonwealth of Virginia during emergencies and times of civil unrest.”He served on active duty in the U.S. Army for eight years, as an 88M motor transport operator stationed in Germany and Fort Knox, Kentucky. After leaving active duty, he joined the U.S. Army Reserve and served for seven years. Initially he served military intelligence Soldier stationed at Fort Meade, Maryland, then he became a 31B military police officer stationed at Fort Belvoir, Virginia. Outside of the VDF, Frederick works as a federal police officer with the Department of Defense. He and his wife have been residents of Virginia for more than 30 years, and they are parents to four adult children. He is also a member of the Prince William County Racial and Social Justice Commission. He represents the Neabsco District as well as serving as the subcommittee lead on Policing and Community Services.During his 17 years in the VDF, he has held multiple positions including platoon sergeant, training noncommissioned officer and first sergeant. Frederick said his recent state active duty service in support of Virginia’s pandemic response made significant impressions on him.“When I was placed on state active duty to work at the Virginia Emergency Operation Center in the Situational Awareness Unit, I served on SAD for nine months and got to meet Governor Northam several times when he visited the VEOC,” Frederick said. “Working on the Virginia COVID-19 response for six months, I really enjoyed assisting the National Guard with their fight against the pandemic and trying to make a difference dealing with COVID-19.”Frederick offered advice his fellow VDF members when it comes to matters involving diversity, equity and inclusion.“We are in some trying times, and never have I ever seen our country so divided,” Frederick said. “Don’t be afraid of change, embrace it. When you get up in the morning, it starts with that man or woman in the mirror. Be the change that you would like to see, we are all Americans and should treat people the way that we would want one of our family members treated.”

He also said there are always going to be times to make a difference, and when opportunity knocks in your door, don’t be afraid to open it.“Sometimes you will make a mistake or get knocked down,” Frederick said. “Take ownership of the mistake, try not to let it happen again, get up and dust yourself off, keep moving and use it as a learning lesson.”He also said that leaders have a responsibility to continuously communicate expectations. “Give your subordinates a task and let them do it but always check to make sure the task is accomplished,” he said. “At the same time, it gives them the opportunity to ask questions when they don’t understand.”He also said effective leaders know what responsibilities to delegate in order to accomplish the mission and goals of the organization. “Treat people the way you want to be treated, but in a position of authority you have to be fair but stern at the same time,” Frederick said. “Values are the guiding principles in our lives and every leader has their context of core values. When it comes to me, it is honesty and trustworthy that when you tell me something, I can trust you for your word, no lying.”He said ethics and character mean doing what’s right when no one is watching. “Treat people the way you want to treated and have the moral fortitude to do the right thing,” Frederick said. “My way is not always the right way and there’s always room for improvement, and we should be open to accepting new ideas and more efficient ways. People assume when you disagree that it is always an argument, so convince me your way is the right way or better.”Be able to find that happy medium is very important, he said. “Anyone beginning their leadership development must effectively grow into the role and work to become the type of leader people willingly want to follow,” Frederick said.