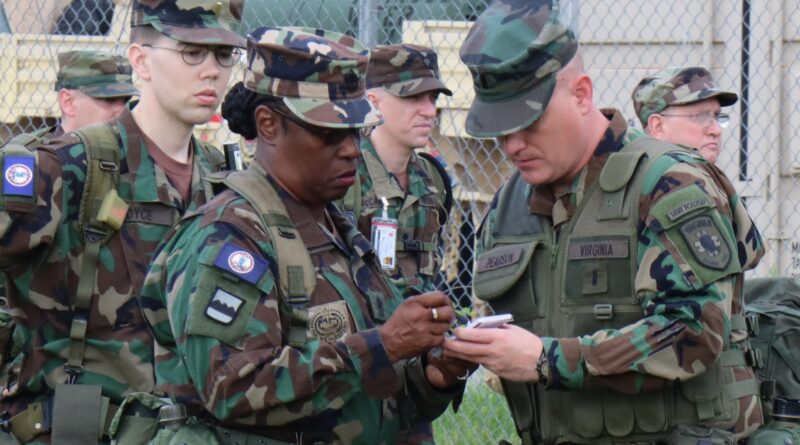 Baldon serves as the first sergeant from Bravo Company, 11th Signal Battalion, 1st Regiment, and she has been in the VDF since June 2008. She joined the VDF after seeing a news report featuring the VDF, which prompted her to learn more about the organization. She scheduled a visit to a VDF community support event, and she joined the same day after meeting current members and seeing them in action.

“After raising my family, I wanted to rejoin the military but was a little too old to go back in,” Baldon said. “The VDF gave me the opportunity, at an older age, to go back into uniform, share my previous military experience, and learn and update my skills to serve the community and the Commonwealth of Virginia.”

After completing basic training at Fort McClellan, Alabama, Baldon served in the U.S. Army Reserve from July 1976 to August 1984. She was assigned to the 317th and 320th Regiments, 80th Division (Training) in Alexandria and Fort Belvoir first as a company clerk and then as a supply clerk.

Baldon said of all the places she has been,  Fort Jackson, South Carolina, was her favorite.

“My most favorite day was seeing the troops you had trained graduate on Graduation Day,” she said. “This was the beginning of my love to teach and see troops grow and move on. It was, and still is, a great learning experience for me. Amazingly, I am still in touch with many of my comrades.”

Baldon says she continues to serve in the VDF for the opportunity to share her experiences and train new troops to become leaders and be ready to help community and commonwealth.

“There is always something new to learn here in the VDF,” she said.

Since being in the VDF, she has completed several successful state active duty missions, been an instructor for initial entry training and the basic noncommissioned officer course and also sat on several promotion boards.

In addition to the VDF, Baldon works full-time for Fairfax County Public Schools, and she is an active member of her last Army Reserve unit reunion committee. She is a proud grandmother of seven grandsons and one granddaughter who love to come over on weekends for sleepovers and play basketball. She also loves to cook, bake, entertain family and friends, sew, tend to her plants, flowers and garden as well as go for walks, watch football, travel or just have a quiet moment reading or looking at tv.

Baldon says the VDF has helped her learn to be flexible and ready for last minute changes, and that applies to her civilian job as well as her personal life.

She has advice for any women looking to serve in the military or VDF.

“This is your chance to see new places, new faces, and to learn new and exciting things that you’re not taught in school,” Baldon said. “Life is not easy. Don’t be afraid to try something new and different. If you fall down get back up, stand-up straight, stand your ground, and try it again.  This way you learn which road you need to take to accomplish whatever it is in life that you are going after.”