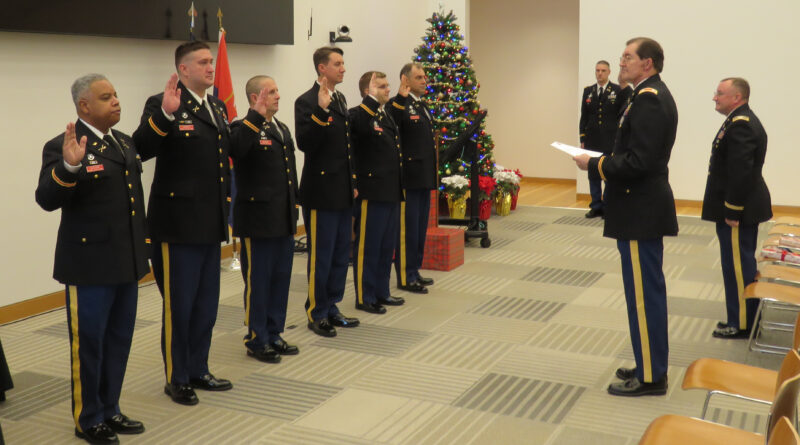 The six new officers comprised Bravo Class, the second VDF OCS class of the year. The first set of graduates, known as Alpha Class, graduated Sept. 17 in a ceremony at the museum. Read more about their graduation ceremony at https://ngpa.us/23661.

Brig. Gen. (Va.) Justin Carlitti, Jr., the VDF’s commanding general, praised the new officers for their role in helping the VDF to realize its vision of the cyber mission as a support to the 91st Cyber Brigade. “What they do is critical,” he said. “They protect the commonwealth.”

“Inside the DNA of every one of us, is that desire to serve,” he said. “Part of that is in our DNA to protect others. As officers your job is to put the needs of your troops before yourselves. That’s your mandate, to take care of those that are in your charge.”

Diddams said it can be tough because you have to speak truth in everything you do.

“You have to do that with tact,” he said. “You have to have courage to be able to say the things that need to be said, in a way that will help motivate your troops to excel.”

In his keynote remarks, Col. Matthew E. Wear, commander of the Virginia National Guard’s Information Operations Support Center, highlighted parallels between the VDF’s 31st Cyber Battalion and the VNG’s 91st Cyber Brigade, including the common pursuit of excellence. Wear said that while VDF and Army uniforms may differ, their backgrounds and principles are very much alike.

As IOSC commander, Wear serves in the Joint Force Headquarters as J39 for information operations as well as deputy commander for the 91st Cyber Brigade.

Since joining the Virginia Army National Guard in January 2001, Wear said much of his career has been devoted to defending networks, developing Soldiers’ skills, and establishing new capabilities to keep pace with cyber as an emerging capability.

When he joined the National Guard, Wear said the 91st Cyber Brigade wasn’t even an idea on the horizon. Instead, the VNG had the Virginia Data Processing Unit.

“At that time, it was the largest computer network defense organization in the Army National Guard,” Wear said. “But its origins were in providing mainframe support to the National Guard Bureau. As you can imagine our skills and capabilities and structure were really lacking.”

Wear said that addressing those concerns became “a multi-year quest for the leaders and soldiers within the unit,” with participation from all ranks. Wear said that this was not something that the Army asked the unit to do.

“The efforts were always proactive in nature, driven by the relationships and opportunities that we’d worked to develop during the course of years,” he said. “It’s hard to believe now, that we were knocking on doors looking for work. Now we’re running to keep up with demand.”

Wear said that the new graduates face similar challenges and opportunities. “Most importantly, will be your demonstrated proficiency. There’s always a string of certifications. But what it always comes down to is: are you able to perform? That aligns well with the Virginia Defense Force’s vision statement about service to the commonwealth.”

First Lieutenant (Va.) Michael Perini, the VDF’s officer in charge of training in the G3 operations section, said that 2022 marks the first time that the VDF has run two OCS sessions in a single year. However, he emphasized that training quality had remained at the same level and praised Bravo Class for maintaining high academic performance and leadership development while they performed their regular duties with the VDF.

Perini told the new second lieutenants that “rank does not equal leadership acumen” and encouraged them to “lead with character” in accord with the U.S. Army’s seven core values, as expressed in the acronym LDRSHIP: Loyalty, Duty, Respect, Selfless service, Honor, Integrity, and Personal courage. He noted that the vowels E, E, A, were missing from the acronym and offered his own definitions.

“The First ‘E’ is Effort,” Perini said. “Attack what you want to achieve in the VDF. This is not a one-day-a-month job, it’s an everyday job. ‘A’ for is Ability. All of you are experts in your own field; that’s what makes the VDF unique. Develop your abilities as best you can.  The second ‘E’ is Enthusiasm. I don’t mean ‘rah-rah.’ I’m talking about going about your job with an attitude that it’s a privilege to serve in this uniform, to serve this commonwealth and this country.”

Warrant Officer One (Va.) Vincent Poto, who served as a training, advise, and counsel or TAC officer to the OCS class, also told the new graduates that their performance had been exemplary. “I’m very proud of you. You should be proud of yourselves.” He encouraged them to increase those leadership skills by continuing to learn.

Second Lieutenant (Va.) Daniel Coleman will serve as the officer in charge of the General Military Studies Detachment in the Support Operation Group. He previously commanded the VDF’s cyber detachment and was instrumental in the unit’s transformation to the 31st Cyber Battalion. This reorganization and subsequent leadership initiatives included development of a mission statement, values statement, and detailed goals and objectives. He also oversaw preparation of a training packet for new recruits that prepared them for state active duty within 60-90 days, and a professional development course for cyber officers. Read more about the battalion’s change of command ceremony at https://ngpa.us/23662.

In his civilian life, he runs a family farm in Culpeper County, training horses, running cattle and teaching polo as well as serving with the Little Fork Volunteer Fire Department in Rixeyville, Virginia.

Second Lieutenant (Va.) Philip Gorman will serve as the S4 logistics officer in the 31st Cyber Battalion. He enlisted in the VDF in 2020 to give back to the Commonwealth of Virginia and the United States. “At the time, I was working for a pricing-software company shuffling money between large corporations, which was interesting and lucrative but not very morally rewarding,” he said. “My timing was fortunate, as the VDF was just standing up the Cyber Detachment and my 12 years of information-technology consulting experience made me an obvious match for VDF Cyber.”

The new second lieutenant comes from a family with a long military tradition and feels tremendously honored to receive a VDF commission. “My grandfather served in the Marines in World War II and the Korean War. He enlisted before attending OCS and being commissioned as a second lieutenant, so both of us are technically ‘mustangs.’

In his civilian life, he works for a major software company installing software for first-response functions, including 911 dispatch and police recordkeeping.

Second Lieutenant (Va.) Kurt Luther will serve as the S3 training and operations officer for the 31st Cyber Battalion, a job that aligns well with his civilian work as a professor of computer science at Virginia Tech and the Virginia Military Institute. Luther said that he grew up with a deep respect for the military and an appreciation of American history. He saw service in the VDF’s new Cyber Detachment as a way to serve in a military organization while keeping his “day job.”

“I have the privilege of teaching cadets in my classroom, and my research focuses on building technologies that support investigations in areas like national security,” Luther said. “However, seeing the United States and Virginia increasingly targeted by cyber attacks and information operations, I wanted to augment my teaching and research with more direct, real-world experience. As a member of the 31st Cyber Battalion, I have been able to use my educational background to strengthen our unit’s training programs.”

Luther noted VDF service gives him the opportunity to put theory in practice. “As a newly commissioned officer, I look forward to developing my leadership abilities within the VDF and working alongside fellow citizen-soldiers serving Virginia.”

Second Lieutenant (Va.) Robert Reese will serve as commander of Bravo Company, 31st Cyber Battalion. He joined the VDF in 2019 when Col. Todd Hubbard, the Virginia Army National Guard chief of staff, informed him that a cyber unit was being established.

“I had considered joining the Virginia National Guard but realized the time needed for cyber would not be congruent with my stage of life with a family,” he said. “As a result, I joined the VDF.”

Reese said that he appreciated the opportunity to help others that the VDF offers and the ability to serve in a military force.

“To anyone joining I would say that the VDF can be a place to help you grow if you are just getting started in your career and it can be a place where experienced people can also put their skills to use for the good of others,” he said. “Regardless of experience the VDF offers an opportunity to apply skills to help those in need.”

Second Lieutenant (Va.) William Rimmer IV will serve as the executive officer for the General Military Studies Detachment in the SOG. He served five years in the Navy as a submarine radioman but had to accept medical retirement due to service-related injuries.

“I had a military-sized hole in my heart after being medically retired,” he said. Rimmer said that he comes from a long line of military men: his father was career Navy, serving in Operation Desert Storm, and his grandfather served in the Navy on a battleship in the Pacific during World War II.

“When I found out about the VDF I signed up right away,” he said. “I couldn’t wait to give back to the community, wearing the uniform again with pride.” Rimmer said he “jumped at the idea” of joining the newly-established VDF Cyber Detachment, which would give him an opportunity to use his civilian skills as a software engineer.

“The VDF is an amazing opportunity for those who, for whatever reason, couldn’t serve in the military, or those who wish to continue their service,” he said. “It offers a unique chance to give back to the community and help maintain the freedom and safety so many take for granted.”

Second Lieutenant (Va.) Fritz Sassine will serve as the S1 personnel and administrative officer for the 31st Cyber Battalion. He joined the VDF after more than 30 years in the field of Information Technology, bringing decades of technical and leadership experience to the VDF’s cyber mission.

“I learned about the Virginia Defense Force after a long discussion with Warrant Officer 1 (Va.) Vincent Poto,” Sassine said. “He clearly articulated the amazing work the Virginia Defense Force was doing for the state of Virginia. I was surprised that I had not heard of this organization and felt that this was my opportunity to continue to give back as well as serve my country.”

Since joining the VDF two years ago, Sassine has taken part in three state-active-duty missions most recently as a warrant officer one. Now a second lieutenant, “I intend to continue to increase my sphere of influence and continue to make a positive contribution within the VDF.”